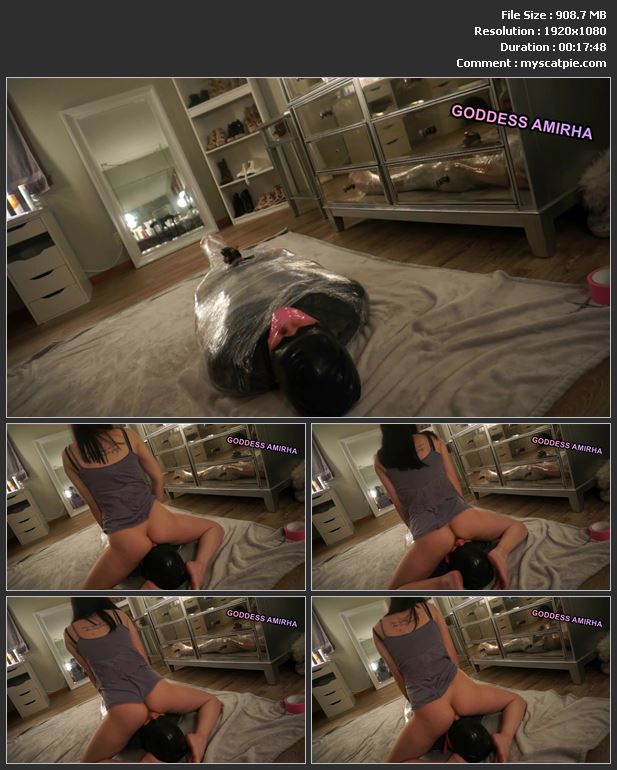 I had been planning a nasty punishment for my asshole boyfriend for weeks, always making fun of my farts and saying I smell like eggs.. that I had a Smelly little girl hole. He thinks it’s hilarious… And I needed to make sure that he would do whatever I told him to. So, after catching him looking at other girls asses I told him his punishment would be two days in Chastity or I would leave him. Once he agreed I went out and purchased a nice CB6000.. picking the absolute TINIEST cage, with the tightest most restricting settings and ordered him to put it on. He walked up to me, wincing in pain as his cock throbbed, trying to get hard but just meeting the hard strict plastic of its cage. Good boy I said, grinning evilly as I slid the master lock through the pin. With a resounding click his fate was sealed. I owned him. But! That was over two weeks ago. Imagine the agony of two weeks in unbearably tight Chastity?! Struggling against your cage & filling it to capacity while I teased you with my ass? You’d do anything for a release.

I finally got sick of his complaining and decided to give him his real punishment. You can get released, but first you have to let me try something. I told him about how I heard getting wrapped in plastic helped shed water weight and I wanted to try it but wanted to test it on him first. He fell for it. He held still like a good little boy and I wrapped him TIGHTLY from head to toe in industrial clingfilm, wrapping his arms and legs individually first before doing the outer layer to make sure it felt nice and tight and stuck together like cement.. How is it? .. I can’t move a freaking muscle. .. Good I said, immediately grabbing a latex hood and placing it over his head leaving only his mouth and nose at my mercy. What the fuck are you doing Amirha? .. Oh just cutting off your senses, Intensifying your sense of smell. I want you to focus on nothing but what’s going to hit your nose… What are you talking about?! ..

I didn’t say you could talk, one more word and that tight little cage on your cock stays for another’s month.. he lay silent. Remember how hillarious it is to make fun of my smelly ass?! Let’s see how funny it is now. LIFT YOUR HEAD .. without saying a word he did as told and I wrapped his face front to back with pink bondage tape. Leaving only his nose, his sense of smell available and at my mercy.. He moaned in fear as he felt his nose sinking into the damp fabric wedged in between my cheeks, leaving his nose pressed tightly against my smelly little girl hole.. it was a cooling sensation feeling his nose trapped so he had to suck fresh air against my ass and through my spandex pants. It was a longgg day at work & the gym today, I’ve been sweating down there like crazy. I almost felt bad.. almost. Haha! Sniff my little ass bitch, how’s it smell? Funny? Good. I kept his nose pressed tightly against my ass for a few minutes making him to suck deep breaths against my asshole while my gas became unbearable.. his true punishment was about to hit.

He didn’t know that I made sure to eat nothing but dairy products for the last two days, drinking extra protein shakes, and even having chipotle for lunch. To top it off, I wanted it to be as humiliating and torturous as possible.. the other part of my diet for the last 24 hours.. was laxatives.. he likes to make fun of my shts too.. so that’s what he’s going to get. Explosive, hot burning gas straight up his nose. He just doesn’t know it yet.. I could no longer hold it in.. I think I feel a little gas coming (giggle).. he thrashed against the plastic with a pathetic wiggle and an MMMFF of pure panic as the first hot fart exploded and slapped against the fabric over his nose. Making it even harder to breathe through the cached fabric.. Isn’t this hilarious? PFFFRRTTSSS .. another one blew out onto his nose and burned on the way out.. omfg this has to be horrible. But fuck him, he deserves it. He deserves more..

I stand up slowly and tell him I’m taking my pants off so they won’t get ruined, watching him thrash and moan against his bounds and gag.. almost puking as his nose slid right into my wet crack and straight back over my ass again, like a perfect fit. Nothing in the way, with no spandex pants to protect him now I pressed my ass tightly onto his nose, almost swallowing it completely and making a perfect air tight seal. No air, just liquid ass for him now.. PRRRRRTTT A hollow sounding explosive wet fart sank its way straight up his nose.. and another directly after.. he was kicking and squirming under my ass fighting to breathe and the urge to puke as the wet farts made their way all the way into his throat.. and I finally let him up.. haha what’s wrong? Hard to breathe with that in your nose? .. without giving any time to catch a breath or answer I sank my weight back onto his face and felt his nose meet my ass perfectly once again.. PRRRFFTT.. every single one of my farts were liquid torture. This went on for what seemed like forever until something a little more came out.. oops I said, as I slid the tape down from his mouth and slid it inside.

All this is going back up your nose.. he moaned at what was about to happen to him again.. his nose once again met with my ass for an air tight seal as I fired more nasty huge wet farts straight into it, leaving him struggling to breathe.. eventually not letting up until he comes.. comes or .. either way.. he’s putting his cage back on before I let him loose..